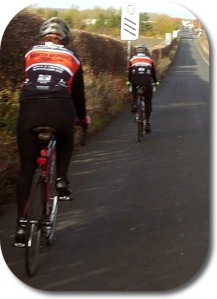 I’ve never been much of a one for uniforms (apart from the cultural type – eg my days as a part-time university hippie).

But I’ve been inveigled into a couple recently. It’s all the fault of this cycling lark. I go out with a bunch of FOSSILS most Tuesdays, with a compulsory coffee & scones stop en route at various establishments in the vicinity. We also arrange trips away occasionally both in Scotland & abroad. One of our number suggested we should call ourselves something, I suppose it might stop the more derogatory remarks that might come our way?

So after a committee decision we became The B-Spoke Ones. Then it became a bit more serious and a suggestion was made to have cycling bib shorts and tops. So the outfit was committee designed & became the rather garish outfit shown in my profile picture, proceeding up Alpes d’Huez before the 100th Tour de France came up (twice) in the afternoon. At first I thought this outfit is so totally O.T.T., but then gradually came to like wearing it. At least it gives the motorists something colourful to aim for, or more hopefully avoid.

I also cycle with another more mixed group, loosely based around North Berwick & East Lothian. It is all organised as a Yahoo group & by emails.  There are a fast group that set off at 8 am, and a more sedate group at 9 am every Sunday. You can guess which group I’m in. Once again the idea was passed around for a group top and after much online discussion a design was settled on with lots of advertising on the rear to offset the costs. This time I didn’t succumb, but followed the many black & orange outfits in my undemure B-Spokes one.

But, one of the gang had bought a jumper, but he thought it was a bit daft advertising a local builders firm & not his own, so he’d only worn it twice. When offered the offending item for a total knock down price I couldn’t refuse. So I now have a dilemma.

Which one should I wear. Do I enter Sportives as a B-Spoke or a NBCC (North Berwick Cycling Club)? Or maybe I should just go along incognito. I think the B-Spoke might win as it is so easy to pick out in event photos and I like being a bit of a peacock, but then again . . . . . . . .

Looking back, the hill up going south from Garvald, East Lothian

I was heading south to the Lammermuirs, hoping for a good climbing day.

Then I heard it, luckily just before I started the bigger ascents. A quiet screeching noise coming from the bottom bracket.

So, do I keep going?, do I do the sensible thing & turn back? At least I stopped & had a look & a wiggle of the cranks – a wee bit of play, but the bearings only done just over 2,500 miles. Decided to keep going on for a whiile. The screeching suddenly become loud and tortuous, what were all those monkeys playing at down there? So headed for home. On the way back the rain came down in absolute torrents & the bike went quiet. Made it back & squelched into the house.

Next day a friend helped me to dismantle the bottom bracket. As we took out the crank there was the sound of clattering bits of metal falling on to the concrete slabs. Tiny ball bearings & odd shaped pieces of disintegrated bearing cage rolled & bounced around. The seal had gone on the one side, probably some time back & everything on that side was totally dry. Strange thing was there was little notice of this failure, which with the lack of phone reception on our deserted moor roads & huge rainfall that day could have lead to an interesting situation. Later on checked the pedals, which I knew had some play, undid them and the bearings were totally shot. I had got some replacements ready.

A couple of days later all the bad bits replaced, and the bike is smooth again & a delight over the heights.

Conclusion, maybe I should check things a bit better, my summer bike is my winter bike & in Scotland this is a rough deal for any machine. Also, my last bottom bracket lasted from new (6 years) so maybe they don’t make ’em like they used to? But hey, the joy is worth the travails.

Another thing brought home how good even my old bike is, went out on my old hybrid and what unjoy it seemed to be to ride it. It’s not about the bike?

A skylark in the Lammermuir Hills

The title for a recent ride brought to mind the joys and perils of riding.

The first of the two in the title may be obvious in our rural area, along with toads jumping across the road in front, buzzard soaring, weasels scurrying, deer and badger roaming etc, etc.

But, amongst this seeming paradise of flora & fauna there is a downside.

Yesterday was a double attack, first a unpleasant nasal attack – flew straight in somehow, unpleasant -but was easily snorted out. The second was a bigger bug which hit the back of my throat. Fair gave me the boak it did!! Managed to choke/ spit it out, but a day later my throat is still somewhat sore.

Other encounters have also been ‘interesting’, dodging sheep at high velocities (me not the sheep), desperately climbing up one of our steep ascents when a badger wheeced out from the side and started to work its way down towards me, only veering off at the last minute, deer leaping out just in front scraping hooves on the tarmac desperately in attempt to escape, a ‘stick’ rolling across the road which turned out to be an adder. These are just some of those I recall, but have managed so far to avoid any consequences.

So the idyll of the countryside ain’t all it’s cracked up to be, and I haven’t even got started on mad dogs, gravel on the bends, thorns from trimmed hedges and mountains of mud & stones from farm vehicles.

I sometimes wonder about the cycling/ sports industry.

As more and more folk take up going out on their bikes, so the pressure mounts to buy special foods/ gels etc., drink special concoctions, wear special clothing & footwear.

For a while I’ve thought that a lot of it must be a load of tosh for the vast majority of us, this was confirmed for me in a BBC Panorama report as well as other news items.

Drink water but not much, occasionally with a bit of orange juice (or wine) in it.

Make up goodie bags of nuts, raisons dates, dried fruit, bits of chocies, jelly babies etc which I can nibble on from a triathlon bag on my crossbar (or whatever it’s called nowadays).

And it works for me.

So maybe some of it does the stuff, but at least I don’t seem to buy into it all.