Does this mean me?

I should be past being affected by this?

Strava – that demon of the computer age, that beguiler, that drawer in of thoughts and actions, at least a bit of the time – it’s there.

But, if you are a fan (or taken in by it all) it can compel you to try, justify outrageous effort occasionally or just add a wee bit of excitement to an everyday ride.

So, if you’re slightly addicted (or worse), it’s a joy, especially on a calm day, to get home, load up your ride and see a PR pop up.

But occasionally, just occasionally, or in my case very, very, very occasionally that little crown appears. Yes KOM, or for the uninitiated King of the Mountain, though sometimes those mountains can go down as well as up, just like the stock market.

So the wind is blowing, it’s in your favour on a particular segment, you go like crazy, knowing there’s loads of young, fast thrusters cycled this stretch before you. But, you don’t give up – it may be long or it may be steep but you go for it, legs aching, heart beating, maybe a bit faster than it should, breath rasping but enjoying this all out feeling despite the hardship. You get home, upload again and there it is – you’ve done it – that magic crown appears on the achievements. A glow of satisfaction, even though you know in your heart that nature has really been on your side, or just sometimes not. Then the wait for the inevitable.

A wee while ago the wait wasn’t long. There was a segment locally that I went over, I worked on it diligently every time I went that way and then one day – yes – into the wind – it was mine. But next day a gale raged and with it was blown away my crown by an enterprising yoof.

Two weeks ago, it was blowing a hoolie, I was with another companion who was slightly faster on the 3.6 mile segment, but he’d forgotten his Garmin. We were both giving it the works, dropped down low, joyously giving it the bizz. Made it home – YES, I’d got it not just one, but two KOMs, Andy must’ve been a bit fed up? These ones lasted a week, then, while I was out with another group, some pals went out together on a real blasting day and a real gale and boof, I dropped into 4th & 5th place, ah well – them’s the breaks.

So is it worth it, definitely yes, some days I just like cruising, but on others I’ll take up the challenge and just try to go over the top one more time.

In the village, before the storm

It was all because of Gonzalo, who crossed the Atlantic to say hello to us all over here – hurricane Gonzalo.

There have been some gales and wild winds recently, but they bring bonuses.

There’s the decisions do I go out? Upwind first, then turn and have a glorious return? Downwind and start with the delight? Across the wind – will the crosswinds be too much as they swirl through the spaces between the houses or gaps in the hedges? Can I make a route that winds its way between sheltering hedgerows or walls, that will creep up hills that hide the wind, or tack to and fro on a course diagonal to the wind?

So decision made – upwind first & head for the windward mark, tacking as we go (one for the sailors amongst you). After 10-15 miles, enough is enough. The roaring in my ears, either full on or from one side then the other has gone on for long enough, time to turn and head downwind.

Now is the time to choose the exposed bits, the wild upland roads with few walls, fences, trees or hedges. Fly, fly, fly – chasing my own tail.

The suddenly it’s there. That eerie calm when you’re going the same speed as the wind.

But not still, speeding along at 25 – 40 miles an hour with no sound except the whirr of the pedals, the faint whine of the chain and the sound of tyres quietly moving on the tarmac.

So – I stop peddling, even calmer, no chain noise on the sprockets, no feet spinning easily round,  just more delight. Then after a mile, 2 miles if I’m lucky, it’s time to work again, or sometimes the meditation is broken by the surface being disrupted, gravel crunching, potholes to be dodged, ruts in the road to be avoided, animals to dodge.

But sometimes, just sometimes I hit that sweet spot. I’ve had it occasionally in other sports, that totally windless day on the top of some peak, with a broken spectre reflected below on a bank of valley cloud, the lake with the perfect reflection and the canoe gliding silently across the surface by an ‘Indian’ stroke without a splash. But somehow it’s not the same. You haven’t tussled & worked so hard against the elements to get to where it can all happen. 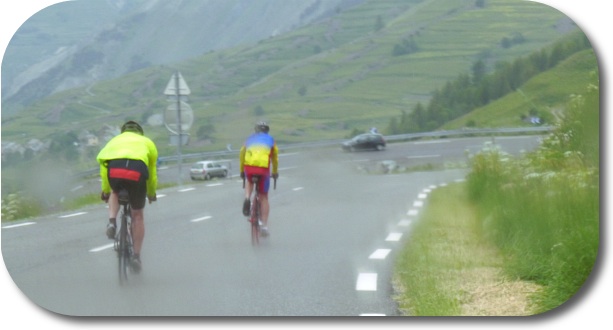 Think this could be a theme coming on, wandering around the senses?

I was very conscious of the sound of my tyres on the road the other day. It was quite windy & I was freewheeling down hill with the wind behind. The tarmac was fairly smooth and a delightful hum came from the front wheel, with no other sound. It set me thinking.

Normal bike sounds, the usual sound of the freewheel, usually fairly quiet on my Shimano set up. The clunk of the gear change or horrendous crunch if, as I occasionally do, get it wrong. The rasp of the tyres in an occasional skid to stop or over-egging it, the squelch through a puddle or ford, the crunch through gravel, the click over the local train level crossing (which is far from level) or the thud over lumps of tractor mud.  The different noises from the brakes – a gentle rub of pads on the rim, a short squeal if there is dust around or a foul crunching if a wet day has thrown gravel onto the rim. The chatter of cycling companions around or beside you usually entertains you. Then there is the explosion of an inner-tube blowing or the hiss of it leaking.

Then there’s the traffic. The quiet hum of cars, or noisier deep throated rumble of a diesel vehicle, coming up behind. The click of a bike gear change that lets you know a fellow cyclist has teamed up. The roar of a boy racer’s car (not usually women) as it violently accelerates past you. The disturbing hoot of a horn sounding from an impatient motorist behind. There’s also the shout of an irate motorist from beside you, often for no reason, ah the joys of pathetic road rage. The sounds of trains running on nearby railway tracks or tractors working in the fields.

Then there are nature’s sounds surrounding you. The different wind noises is almost always a variable constant, sometimes the patter of rain, the crunch of hail or the crack of thunder. There is also the cries of birds and the flurry of wings as they fly towards or away from you. The sparking of the hooves of deer or sheep as they scamper out of your way, hopefully.  Dogs often bark, or sometimes growl as you ride past, sometimes giving you a doppler effect. Horses in fields or ridden along the road give a whole variety of snorts, whimpers coughs etc, with riders often shouting out a cheery greeting, or a quick ‘thanks’.

Also the welcome salutations of friends, other pedestrians or cyclists are an ever welcome part of the soundscape.

But, the worst is the sound of a fall or crash and the groans of the one who has come to grief, such a compendium of grating noises – hopefully hardly ever heard.

And the strangest thing of all, the fact that for those of us lucky enough to have hearing, we mostly just take all of this for granted. 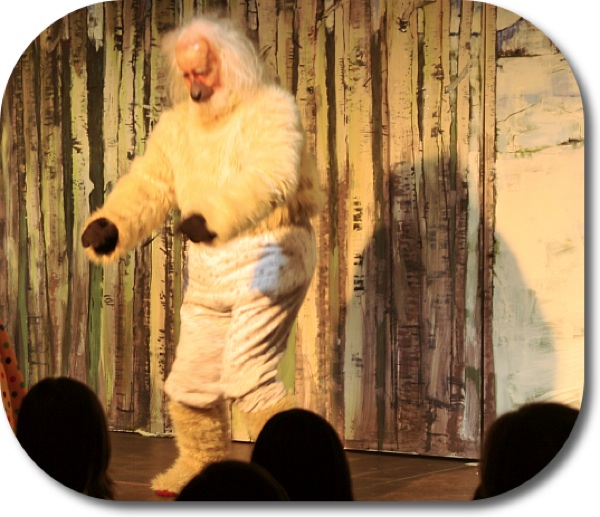 Me as a Yeti in our local Pantomime

I promised myself that when I got to 20+ followers I would publish my training regime. So here goes.

Why the title -well a Tour rider maybe rides for 20-25 years if they are lucky and only a relative few have ever made the history books. But in 2012 a hundred year old guy from France, Robert Marchand, got the world record for his age group for cycling 24 kilometres and 251 metres in 1 hour (just over 15 mph). It was then taken by an American rider. This year, at 102, Robert has beat his own record going 10% faster – cycling 26 kilometers and 927 metres in the hour (about 16.3 mph).

So this is my long term training plan. He only took up cycling again at the age of 67, so maybe there’s hope for me?

So maybe there’s a chance, if I manage this blog for the next 34 years I’ll let you all know.

So is all this harder than the Tour de France training, I’ll maybe find out if luck is on my side?

An East Lothian pheasant, not dashing out.

It’s been a funny autumn so far. The wildlife seems to be going a bit nuts. Drivers seem to be a bit less courteous or maybe less thoughtful, birds seem to have their minds on other things.

So – what’s the upshot of all of this.

Crossing the hills, the sheep take it into their minds to dash out in front of you, but decide to change course and head back to the edge of the road.

At the edge of the woods the deer skitter in front of you but head off into the trees.

The mad pheasants whizz across just before you, without getting that bit too close.

The flies & bugs that batter your face when your mouth is closed.

And as for humans, we manage to scrape past a big car belting round the blind bend towards us, with our wheels teasing the verges of the road and my back wheel skidding as I brake while angled over. Or the other one, when I was coming up the High Street in our village, she reversed out in front of me, I just managed to scrape round the rear of the ‘Chelsea Tractor’ without making contact. Went back and asked her politely to make sure she looked more carefully next time she pulled out and she said “But I did see you”. I was too flabbergasted to say or think of anything & just rode on shaking my head.

Not to me, luckily, but to a cycling buddy.

On a Sunday we go out with a local group. I go out on at 9 am with the slower crew, a coffee stop is almost compulsory. He went out with the 8 am fast crew. I’ve been with them a couple of times, but just feel I’m holding them back when it gets to the hills, plus I feel knackered. Anyways, they were in a group speeding down one of our local hills at 35+ mph when a pheasant flew out into his front wheel. He went from fast to zero in a fraction of time and was thrown right off the bike. He was knocked out for a bit, but recovered consciousness but had a cracked shoulder blade, road rash & skid burns. After a hospital visit he was later back home to recover. The bike’s front fork was broken.

So sometimes, you just can’t do anything about it, fate seems to have its eye on you. So be thankful for the other times when it’s just not your day.