Saturday was fun. The cafe at Gifford closed a few months ago, but is starting to be renovated by a new owner. It was a real cyclist hub too. It will be called the Lanterne Rouge, which might be quite appropriate for me at times (for those who don’t know the association “The Lanterne Rouge“). It won’t open till May as they are totally redoing the place, but as the Gifford road race was on they were giving out coffee & cakes and raising money for the local hospice. The helpers and owner were lovely and the cakes superb. Hey had made a special energy bar/ flap jack which was wonderful. I had thought the racing was over, but when I came up the hill to Gifford, the motorbike cavalcade came down the road towards me, lights blazing, then the leaders shot past, followed by the 2nd group and then the peloton. They did a circuit and came past the cafe. I managed to munch and drink and headed off to the finish  to see then come blasting over the line – great.

The marshals waiting for the next lap

The breakaway comes through 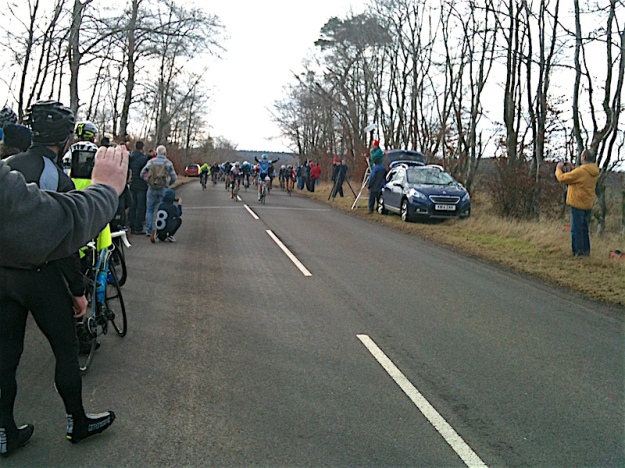 Back together the leader crosses the line

The pack comes through

Last year I decided to ride my birthday at least. I was 67 so planned a 67 mile route. One of my cycling buddies chummed me and we had a wonderful, but chilly day biking out to Stirling, getting the train back to Edinburgh and then cycling back home. The 67 miles turned, somehow magically, into 95. So a birthday ride+. Yesterday was another year on. Fortunately I don’t set the birthday ride to be on my birthday as the March weather here is fickle, to say the least.

This year my cracked rib has intervened as well. I’m back on the bike and slowly ramping up the miles again, though sore a wee bit, as it’s only a couple of weeks since the accident (“Only when I laugh” as the old joke goes).

So I cycled up to join the gang for the Sunday ride, ready to push the mileage if I was up to it. The first 35 miles were super, I was in shorts for the 2nd day running (and this is March in Scotland), just 2 layers on top, felt good & had excellent company. I took it relatively easy up the hills so as not to do too much energetic breathing and stopped in one of the towns to meet some folk, one of whom had an amazing looking tri bike. It was much heavier than I thought it would be too.

Then down from the foothills and a fast cruise along the coast. Just Craig & I now, barrelling along together.

Then I realised that my 68 possible target wasn’t on that day. My chest was grumbling gently at me – there’s always another day sire!

So Craig pottered off, right on his target for the day, while I peeled off, heading for home. But 40+ miles was OK and proved I’m on the way to my birthday ride in the next couple of weeks.

My evening celebration was an a visit to Dunbar to see a lovely Science Festival Light Show projected on to the Town House, with the statue of John Muir (who was born here) being lit up as well, followed by an Italian meal – loverly. 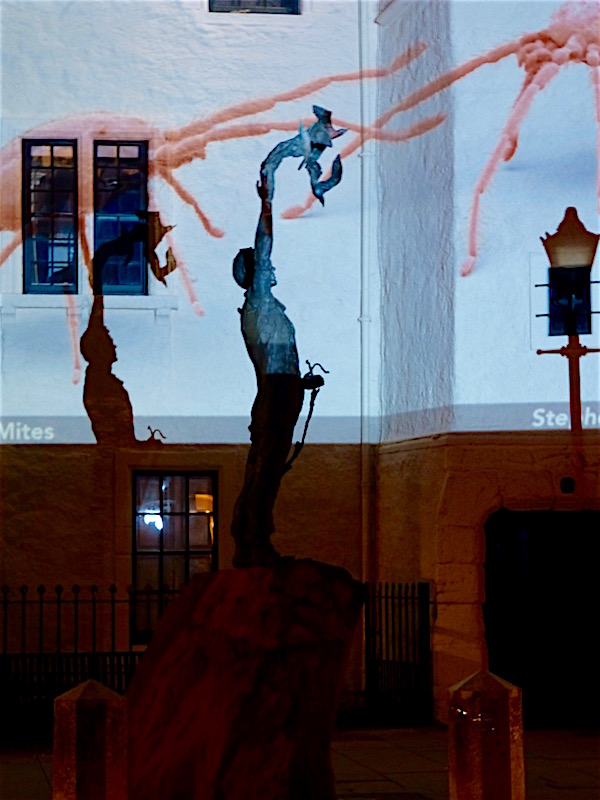 John Muir as a boy

(2 days later) A few rides later into the hills & I’m ready for tomorrow. Forecast is good, no winds and not desperately cold. Wish me luck.

It’s mucky in them thare hills!!

9 thoughts on “Failure will become a Success”