The invite arrived – we were invited along to the Queen’s Garden Party in Holyrood Palace in Edinburgh. We know not why or by whom, so maybe that mystery will be revealed sometime, though the nominators are not supposed to disclose the info. We, of course, were not alone, a few thousand others were there to have a neb & share the occasion.

The temperature dropped to about 11º, with a steady drizzle and a wind cooling us down even more. But as we entered the grounds of the palace it reduced to a fine smurr. The previous day had been warm, and now it’s warm again, so once again the Scottish climate had triumphed. 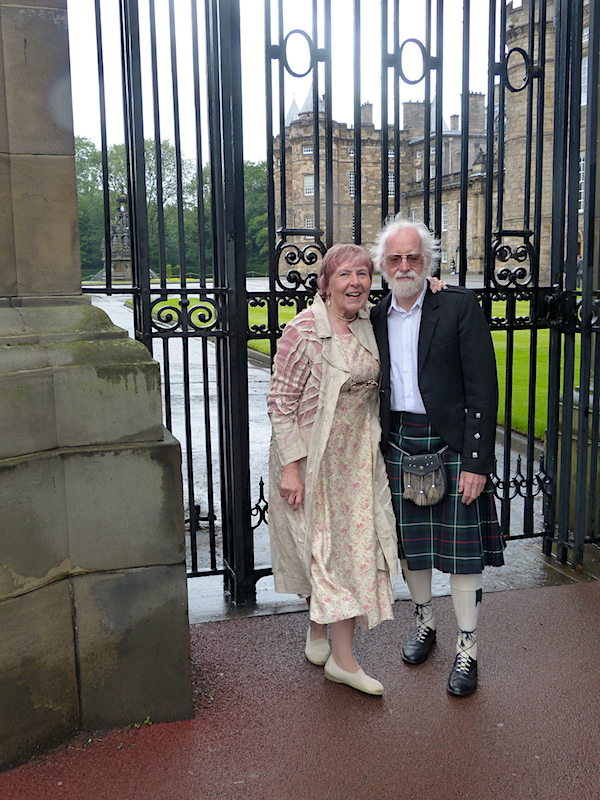 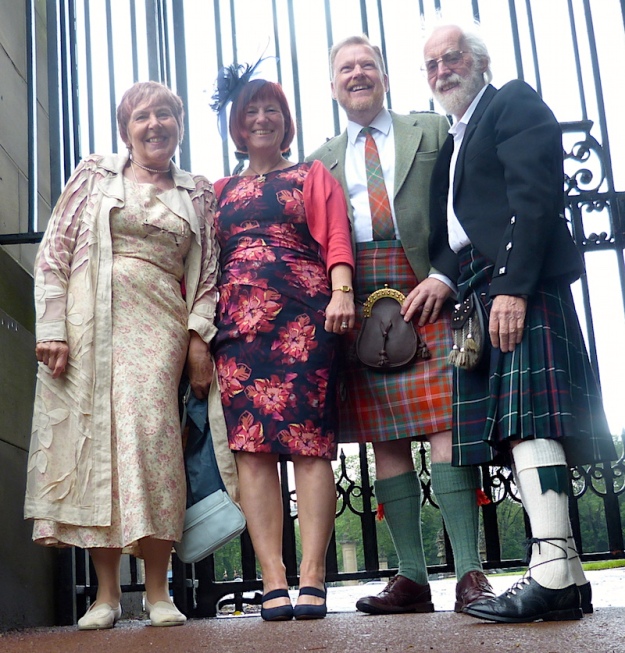 Outside the gates with our pals 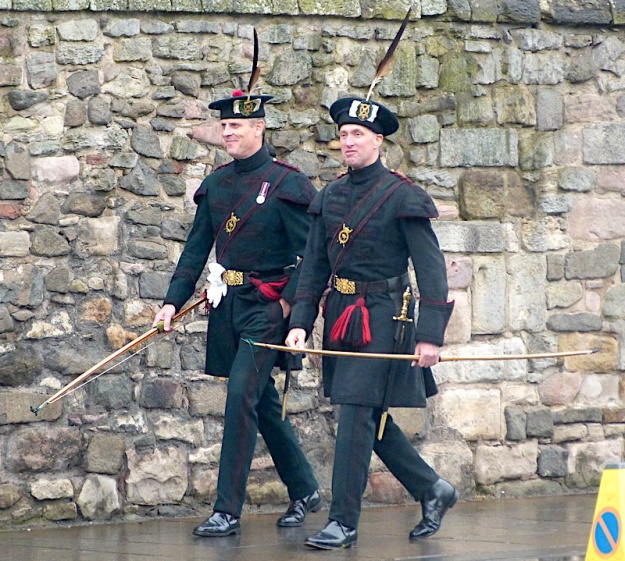 A couple of Royal Archers 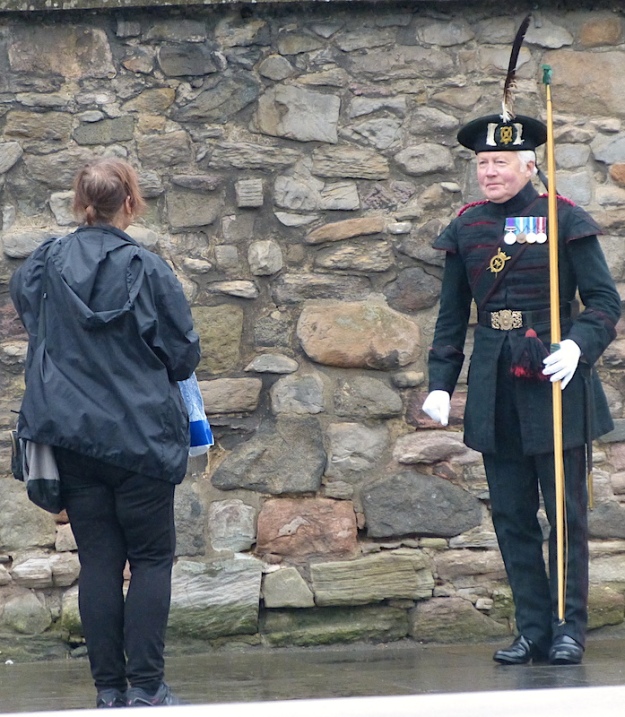 The sentry makes me feel ancient 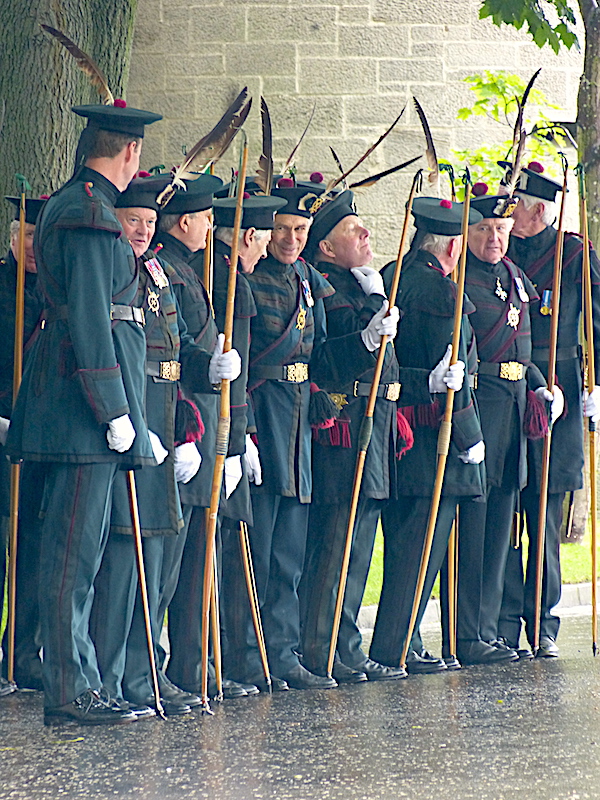 Folk were dressed in their Sunday best so the high heels digging into the grass and soil was a rare sight. Once again a triumph of fashion over common sense (and I don’t exclude myself). Some of my cycling or mountaineering gear might have been more appropriate.

We had lunch at the Scottish Parliament before we came across the road, but once in the palace grounds, we headed to the marquees for a top up. All the usual pomp and ceremony was going on, with the Royal Company of Archers (https://en.wikipedia.org/wiki/Royal_Company_of_Archers) acting as a ceremonial  bodyguard, with lots of marching, lining up etc. 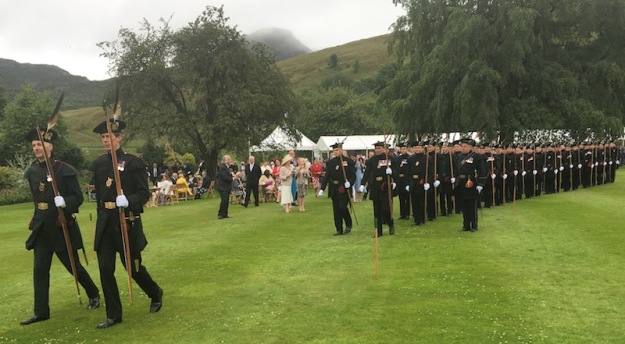 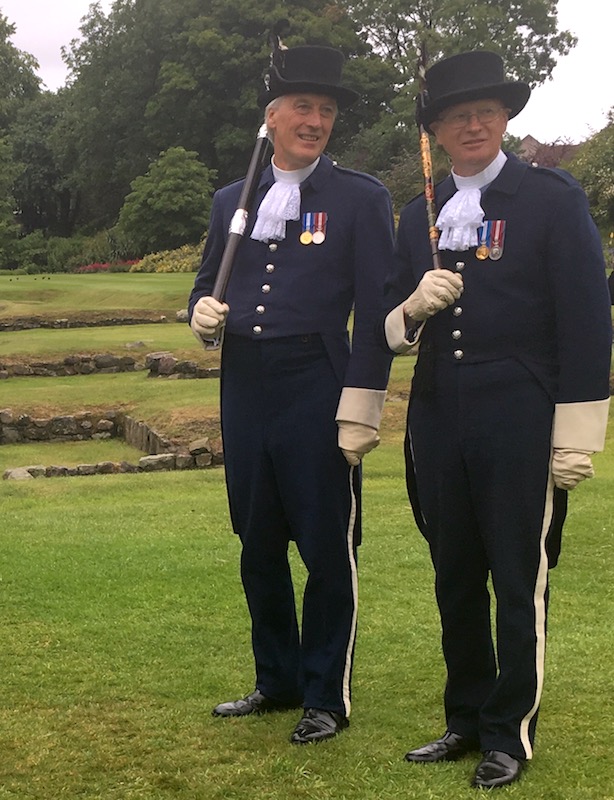 Not sure who these are!

After looking around the grounds the Queen & Prince Philip came out. Being an older sort of guy I was reflecting on how much things have changed, with the mobile phone cameras, selfie culture etc. rather than the reverence of yesteryear. No value judgement here, though no way could I be thought of as a Royalist.

The Queen and Prince Philip emerge 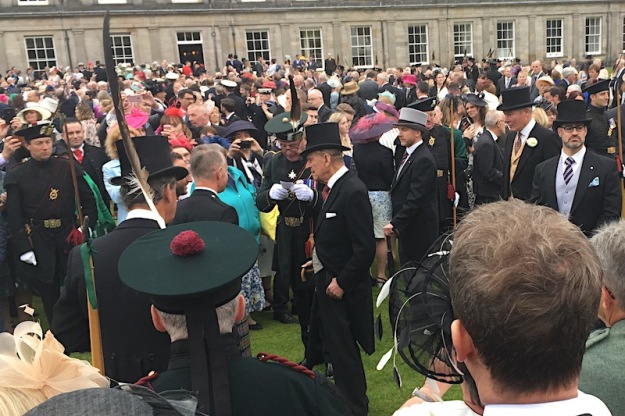 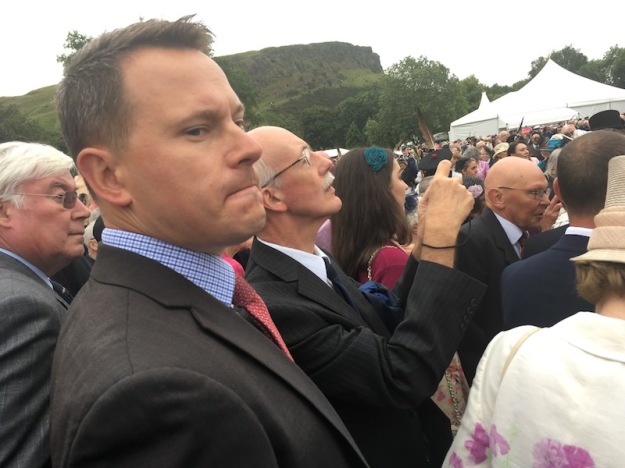 Eventually, Prince Philip came past while the Queen went a different route. Then back for another top up, a listen to the pipes & bands and back to the car before the shivering started.

Different tartans for the pipers 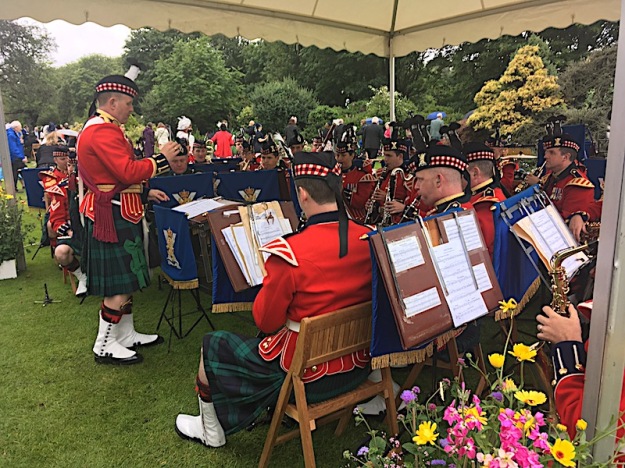 And good they were too

And then I got home for the drama of the 4th Stage of the Tour de France on the TV – all go?

It’s been a bit of up-and-down recently. It’s supposed to be summer, but no one has told the weather goddesses! But cycling just has to carry on, doesn’t it? My poor old bike has been having problems, maybe it’s mourning me getting a newer model? Or just becoming a bit too old. The bottom bracket (the thing the pedal cranks go into) fits into some alloy cups that are epoxied into the frame. Unfortunately these have come adrift & have had it. Colin at the bike shop has tried hard to get something to fit, as Specialized won’t supply anything as the bike’s 2nd hand, so for the sake of a couple of bits of alloy the bike would have to be scrapped. Luckily, one of my biking pals works in an engineering place and offered to try to make replacements, so – fingers crossed 🤞🏻.

Meantime my new Roubaix continues to delight, despite odd little things. Last week I extended the club cafe run a bit (OK then – quite a bit) and came home with 80 miles under my wheels, feeling energised and great despite strong winds out, but oh so quick returning, big smiles both ways too. We also had a club photoshoot for the Scottish stage of the Tour of Britain, all in our cycling finery.

The race is on

Then the weather went nuts. The temperature, after being in the 20s, plummeted down till today it was around 9°. So it’s been back to almost winter gear for now. Today it started off dry but then steadily deteriorated till I got back with squelchy shoes, top and breeks. But strangely enough despite the wind, wet and cold I still enjoyed the ride and the challenge.

The rivers are in flood and so are some of the roads, plus being drenched by passing cars going through huge puddles adds a certain ‘Je ne sais quois’ to the whole thing. 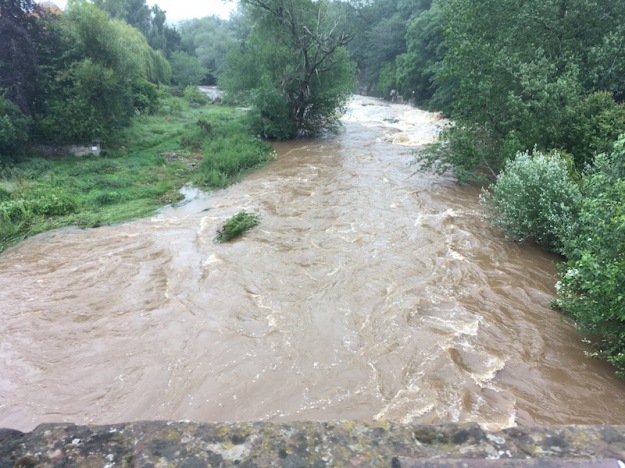 Our local river, which has just been a trickle most of the year

Scotch mist? Just down from Fenton Tower and it’s disappearing. 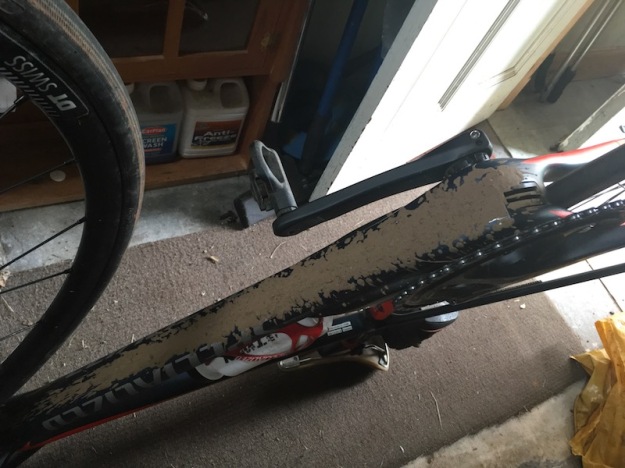 My bike after ploughing through the glaur

Now, written two days later, some of the roads are still flooded, and there is loads of gravel, sand etc. washed down so despite a sunny (and very windy) ride my feet came back soaked after riding through the results of all that water. 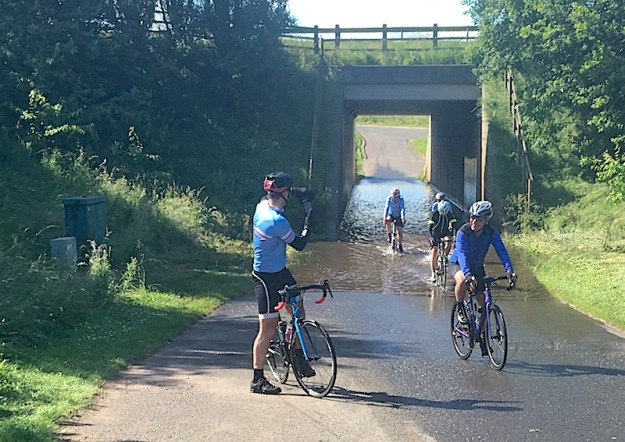 Over half way up the wheels in the middle – soaked feet!!

In just over a week’s time I’ve got an event down south I’ve signed up for. It’s the Dunwich Dynamo. It starts in London at 8 at night and finishes 120 miles up the NE coast. Why? you may ask. Well my niece let me know she was doing it, so I suggested my nephew & I come along for moral support to start with her. Hmmmmm! So there you are. I thought I would be immune to these challenges by now, but obviously not.

So the next time I post I should have a night adventure under my belt.

But before I go – please, please, please, if you are writing about the Tour de France don’t reveal results are names in the headlines. I, and I’m sure others too, watch the recording the next day and it really spoils the event if everything has already been disclosed.

Handy for the Tour de France? Spotted in Dunfermline museum.