But I’ll start with the beast as it arrived first. It was forecast for snow and boy, the forecast didn’t lie. Usually by March in Central Scotland it is rare to have any snow at all, but this time it piled in, driven by big winds, so we stayed put for a couple of days till it blew out. 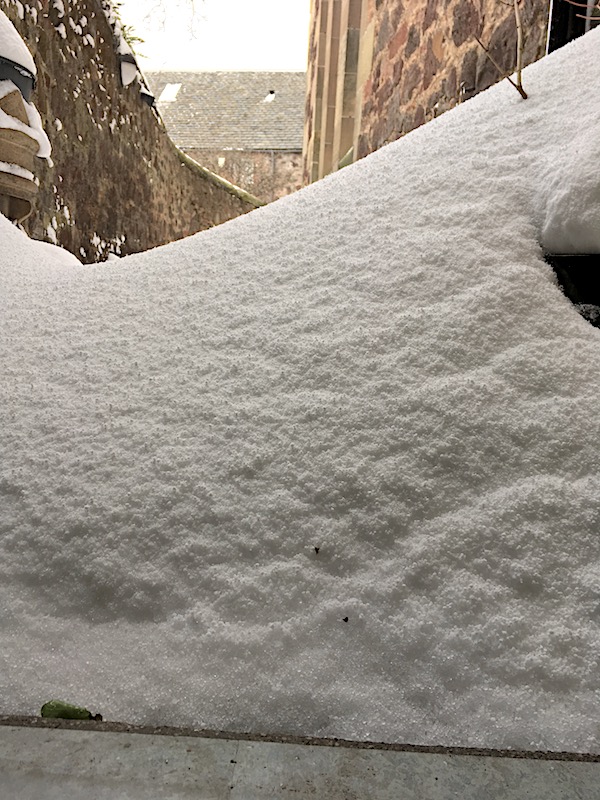 Then it was digging out The Square with our friends & neighbours and getting out the skies again. A couple of lovely wee tours on the boards. 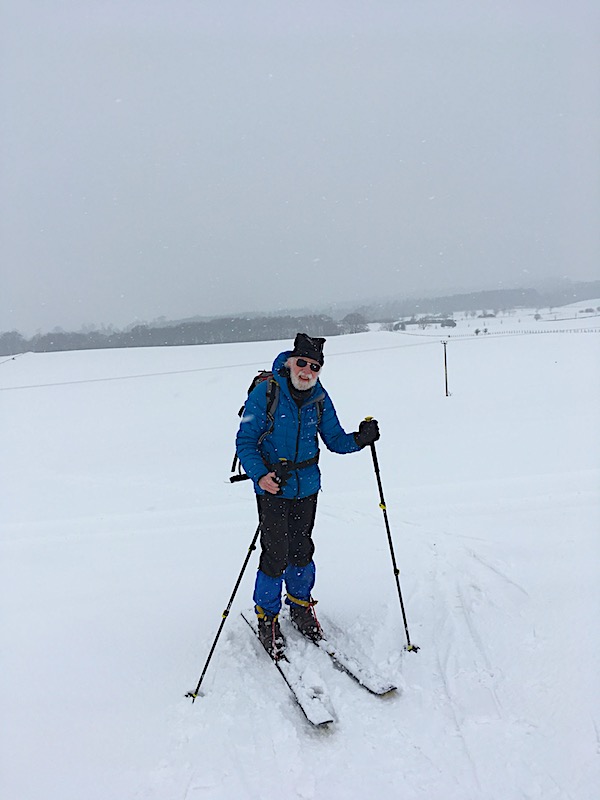 Out on the boards, heading for the hills 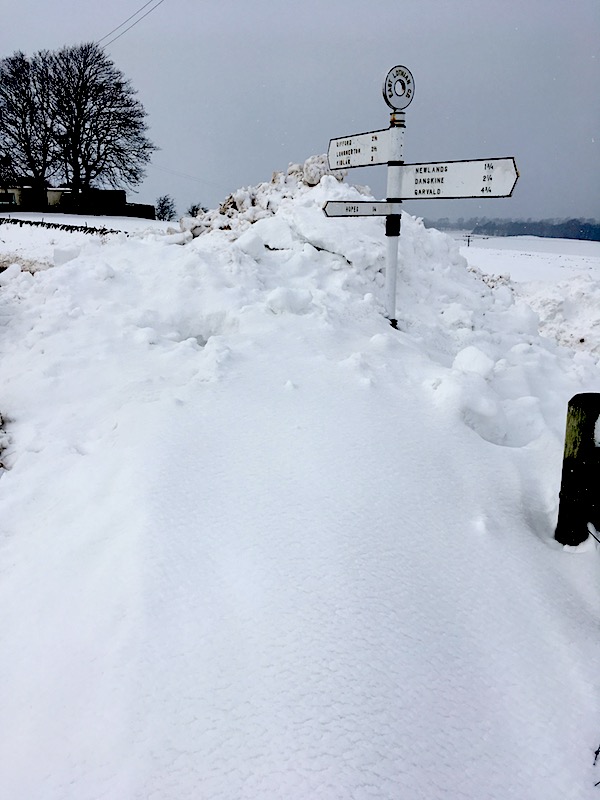 Then the temperature went up a bit and the roads cleared enough to be out on the bike again. So away off, so happy, despite the gunge, snow melt, gravel, potholes, cough etc. 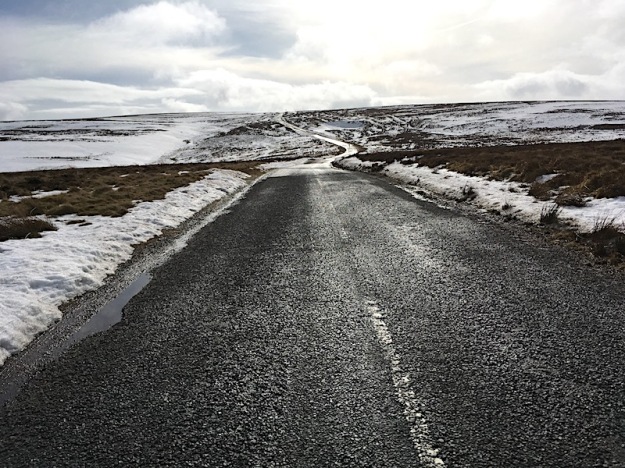 The long road up Redstone Rigg with John & Mike ahead. 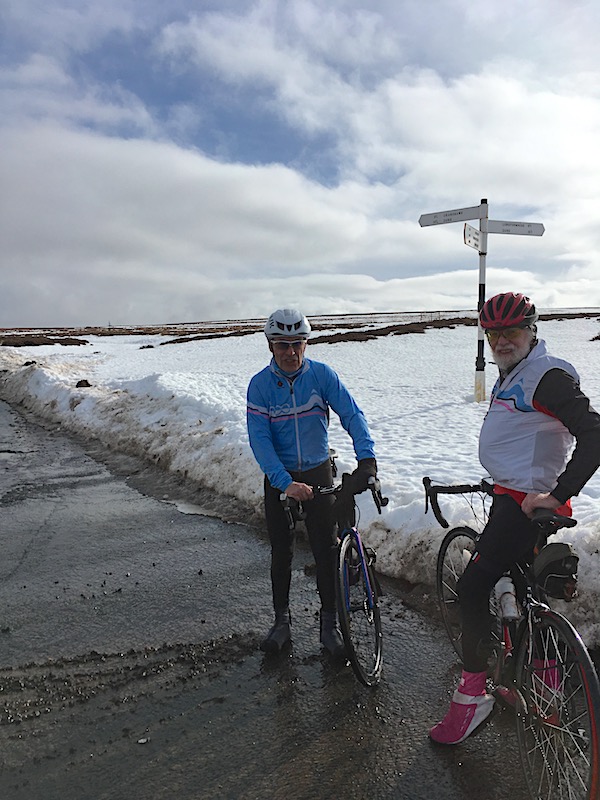 Redstone Rigg summit with Mike, I’ve not put on weight – gloves and hat tucked in! 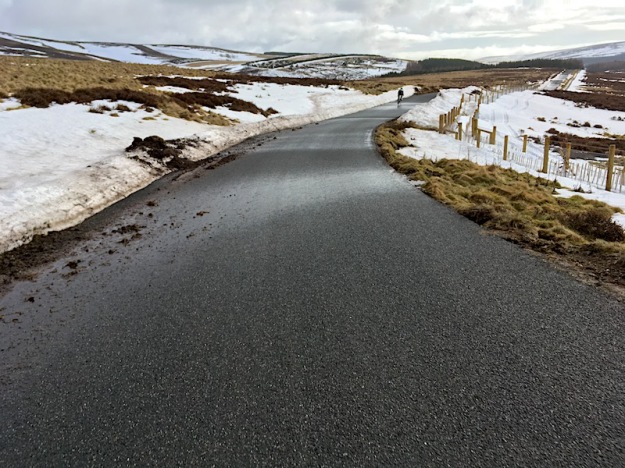 A rapid down in the Lammermuirs 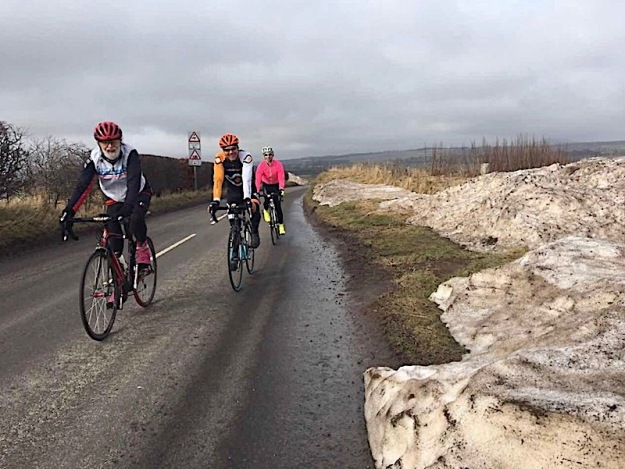 Getting the miles in, nearly home

Then my 70th loomed. We booked an away trip to Peebles, in the Scottish Borders. 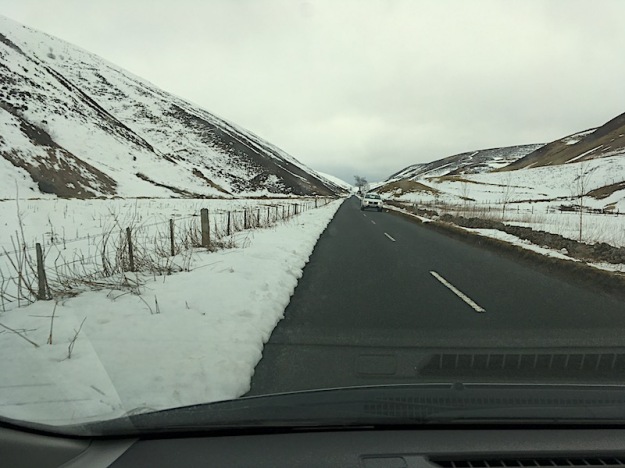 On the way down to Peebles

I took my mountain bike too, as there is a renowned trail centre there at Glentress. As my 69th year departed I took the bike out, full of ambition and headed out and up the hill behind the hotel. A few miles in and a few hundred feet up, there came the snow banks. Unfortunately it was fairly soft so I eventually gave up & slid/ cycled back down. Only just over 5 miles in just under the hour, but still fun. 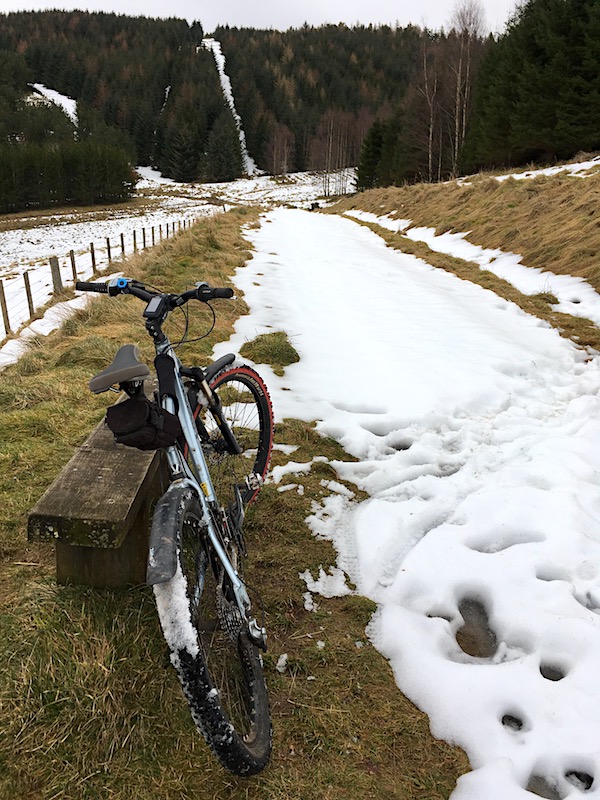 Got a half a mile further

Then off to the swim, steam room & sauna and a well earned meal.

Next day dawned with me entering a new decade, funny how many cycling bits I got as presents?

So after breakfast off on the bike to Glentress to try my luck. My old steed was misbehaving so in to the bike shop at the foot of the trails to have it sorted. The front derailleur wasn’t selecting bottom gear – absolutely essential for the day’s outing. The managed to bodge it as a normal adjustment wasn’t working, so off I went. 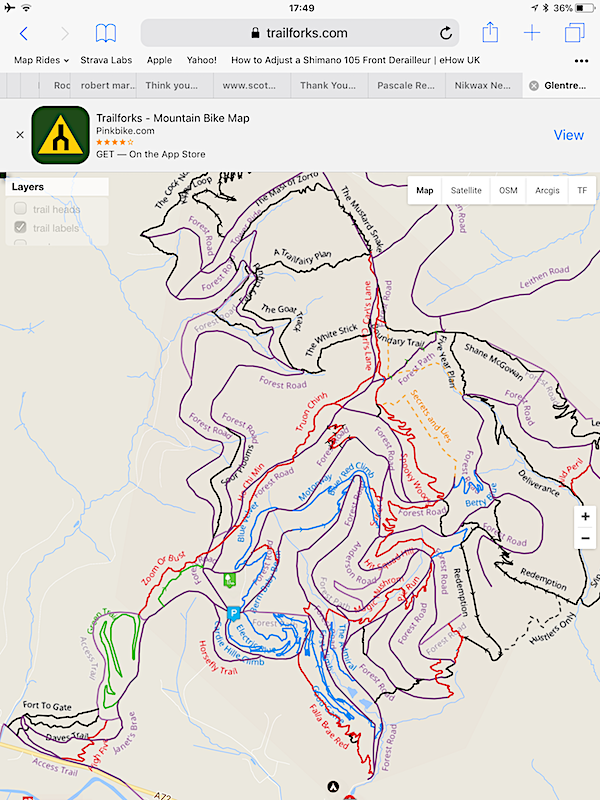 On up the forestry roads, once again the drifts of soft snow impeded progress, so it was ride, slither, get off, push and repeat, and repeat . . . . . .

At one point a huge logging lorry came up behind. I stopped, got off and stepped to the side. Unfortunately the snow was softer and deeper than I thought so I went down on to my back, landed upside down with my feet and hands waving in the air, like tumbled over beetle, and my bike splayed out beside me. The driver stopped to ask if I was OK, but I was just lying there laughing at the situation – so I waved him on. I eventually untangled myself, decided enough was enough as the drifts were getting deeper & set off to find a blue trail back.

With some sort of dignity restored I found the trail and set off – guess what more ride, slither, get off, push and repeat, and repeat . . . . . . 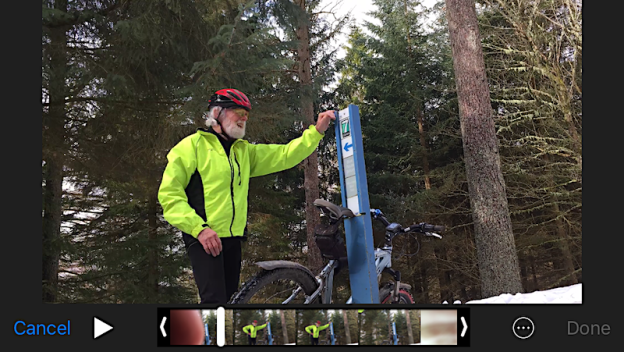 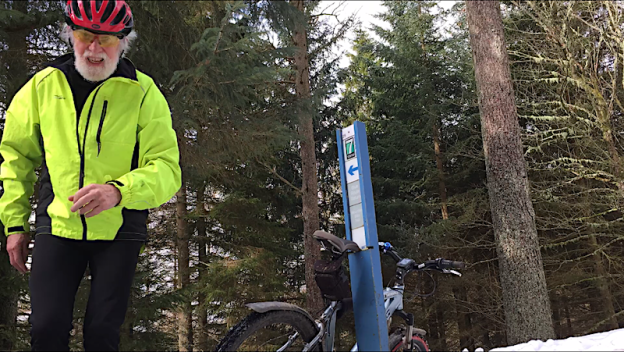 Still smiling (or is it grimacing?) 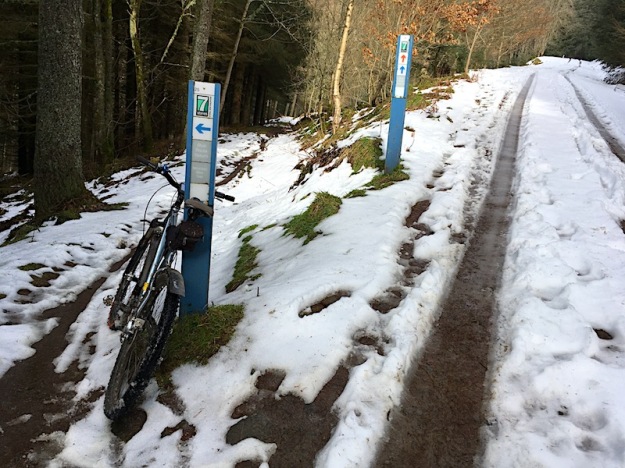 About to head off again 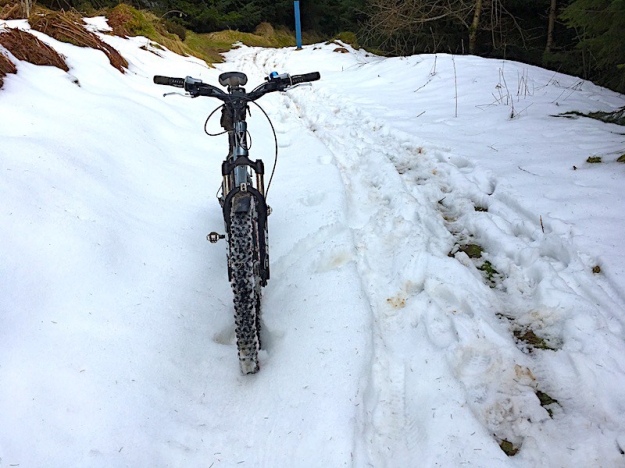 Eventually I got to The Buzzard’s Nest, no chance of trying out the fun park today. A quick chat with some sensible fat bikers the off down. It was a brilliant descent swooping along, dodging the snow banks on the berms and over the wooden humpback bridge. Suddenly I thought, this seems another level up from the blue I’d been following. I had strayed onto the red/ black run. Ah well, just have to concentrate a bit harder and take care till the bottom.

Then it was back along the cycle path. 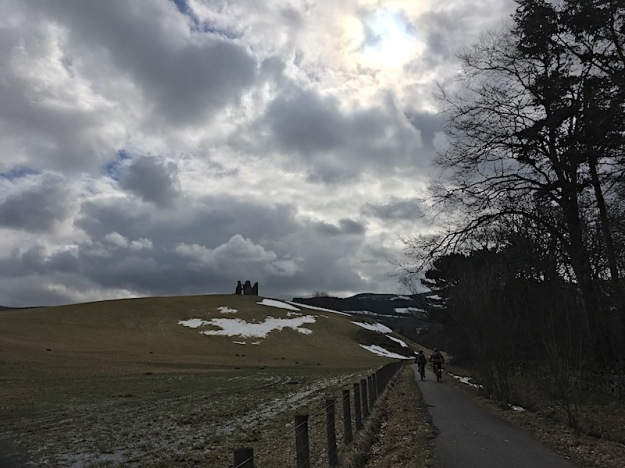 Castle & brooding skies on the way back 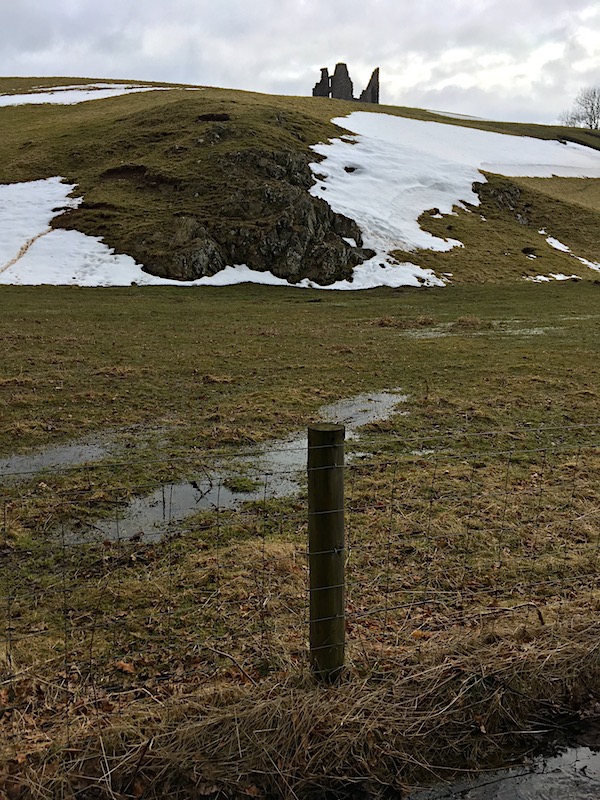 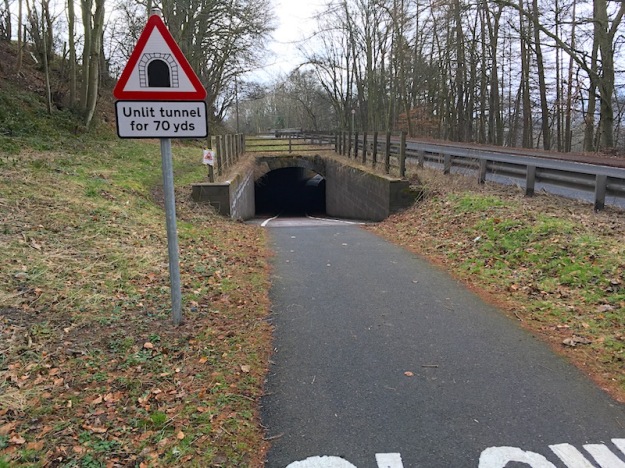 This was followed by a repeat of swim, steam room & sauna. Altogether a slightly adventurous way of spending a birthday. 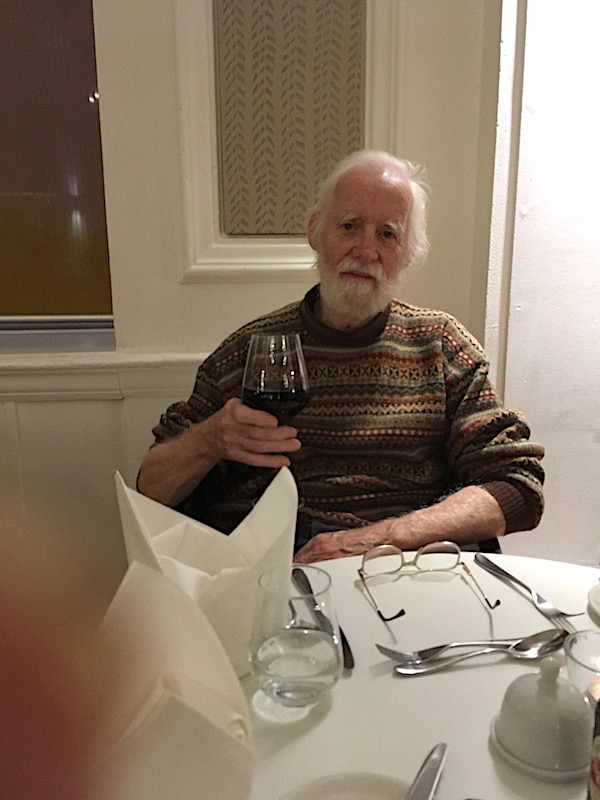 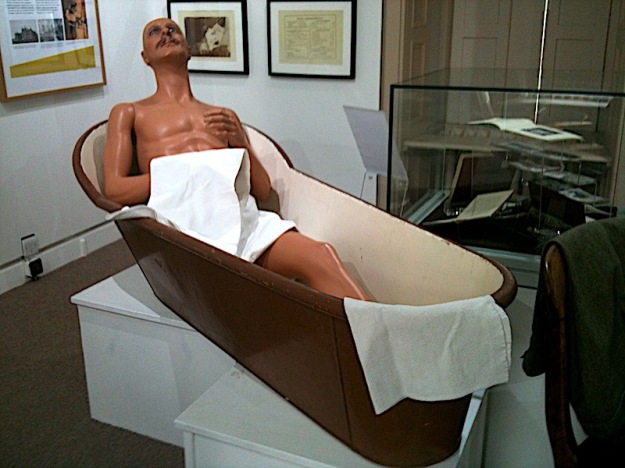 Peebles museum – hydro therapy as it used to be!

Next day back home and out on the road bike again. No snow on the roads, no falling over but not as much giggling and guffawing!!