I had a request from a friend a while back. Her pal had a nephew, Steve, who was cycling up from London to Loch Lomond on a sponsored ride. Would I ride down to meet him at Berwick on Tweed and chum him up the road to Edinburgh? Of course, I said OK. I’d not heard from Steve until he sent an email 2 days before he was due in Berwick. Trying to find a train down I realised I couldn’t easily make it for an early start, so arranged to meet in Eyemouth, following the Sustrans N76. We swapped numbers etc.

After sending Steve a Glimpse (a brilliant iOS app) so he could follow my progress I set off with an interesting meeting with 3 deer at Pease Bay plus some of the locals on horses. 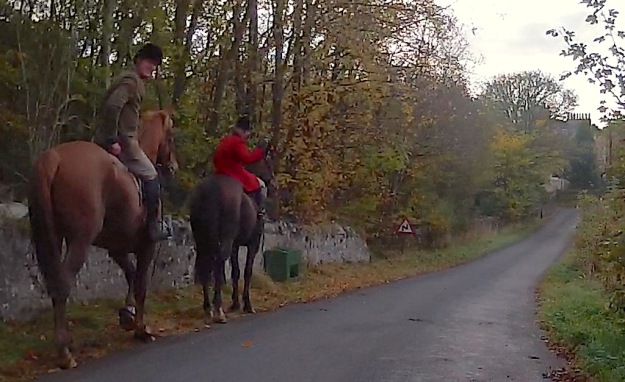 I got to Cairns Cross a few miles out of Eyemouth and stopped at the junction. Along came a rider with his bike decked with panniers etc.

I hailed him and he stopped. “Hi Steve” I said, but he looked a little bewildered. Turned out he was a Swiss rider, from Lucerne, who had set off from Dover and was going to the north of Scotland. After he commented on how beautiful this part of Scotland was, we said our farewells and he carried on northwards.

I rang the real Steve and he wasn’t too far away at Ayton, but decided to see each other on the way. I woodshed down to Eyemouth – no sign.

I carried on along the N76 and just as  was leaving the town I got a call. It was Steve, saying he’d discovered he could cut a bit of the route off with a shortcut (important when your carrying all that gear!) So I shot off back up the hill towards Cairns Cross (though who or what Cairns was I’ve no idea!)

On the way I spied someone pushing his loaded bike up a steep hill. Yes, it was Steve, hurrah! 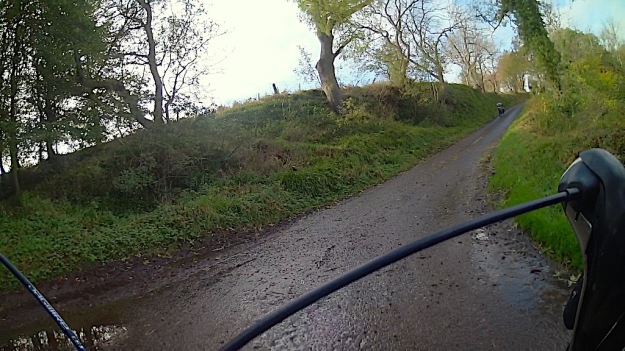 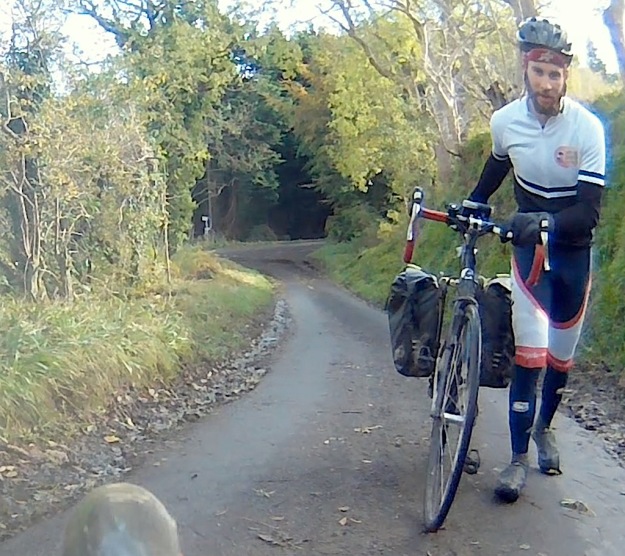 We cycled on, chatting away together, clicking easily with each other with plenty of common ground, cycling, adventures, the outdoors etc. The route is a lovely gradually ascent up to the viewpoint over East Lothian, so plenty of time to chat, swap stories and find out about each other. 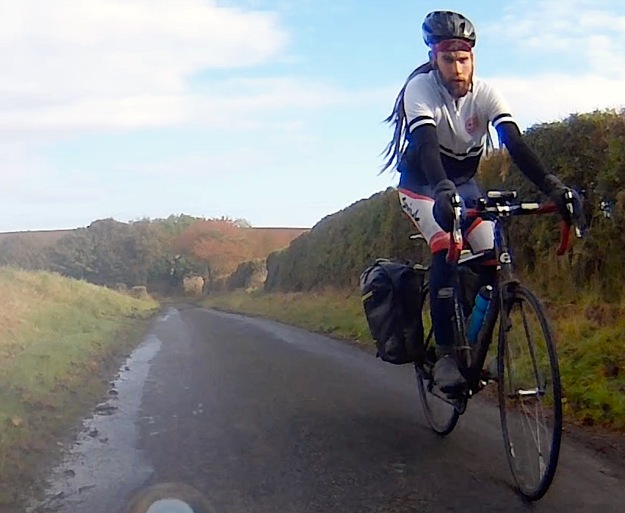 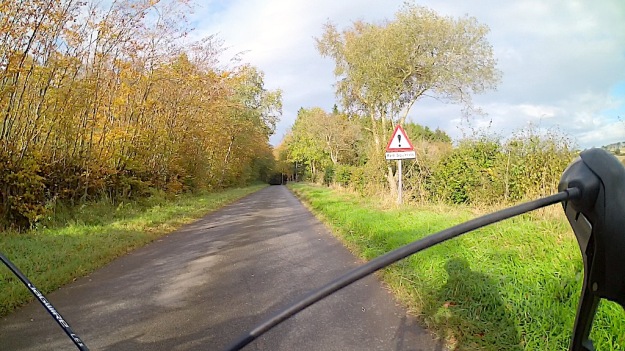 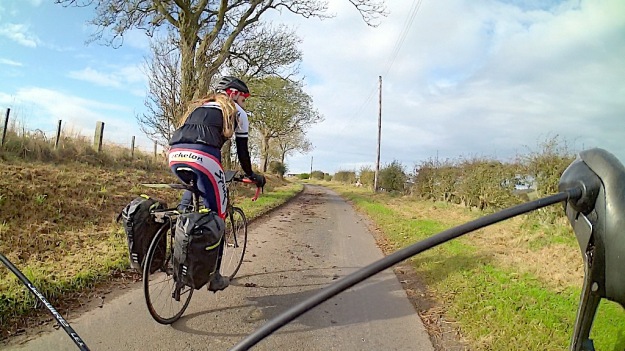 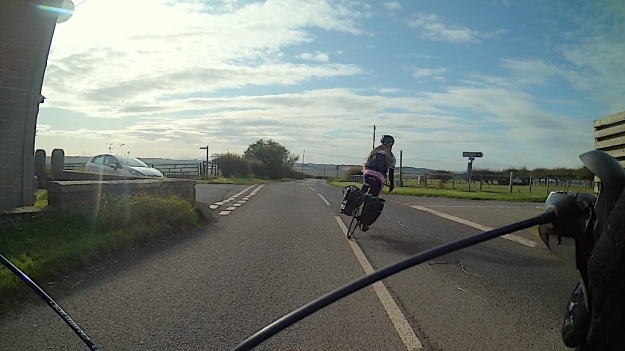 Then after the magnificent view at the top of the climb we had the beautiful long descent into Pease Bay, which I’d climbed earlier.

Contemplating the joy of the descent

This was followed by a careful splash across the ford, a visit to Dunglass Collegiate Kirk (used by Oliver Cromwell’s men as a stable) and eventually back to our place for lunch. 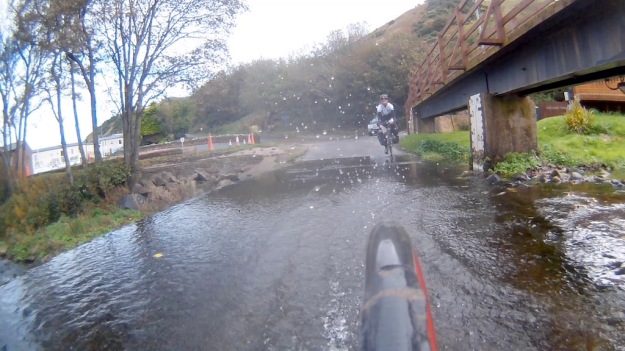 A cheery wave to a courteous driver

A big drop at the East Lothian border at Dunglass 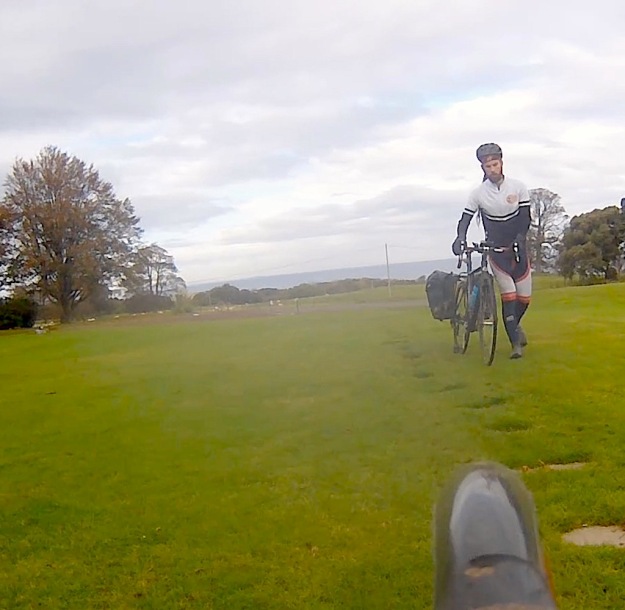 Up to the kirk

Steve had been having trouble with his cleats, so we had a bash at trying to sort it, but couldn’t manage the task. We set off together again, taking him the back way through Haddington and sending him on his way to Edinburgh on a well defined cycle route. 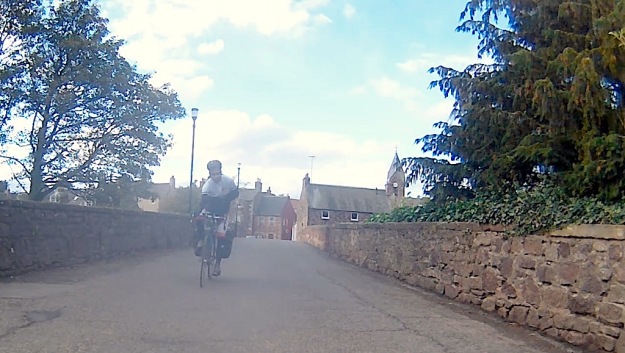 After lunch, out from East Linton 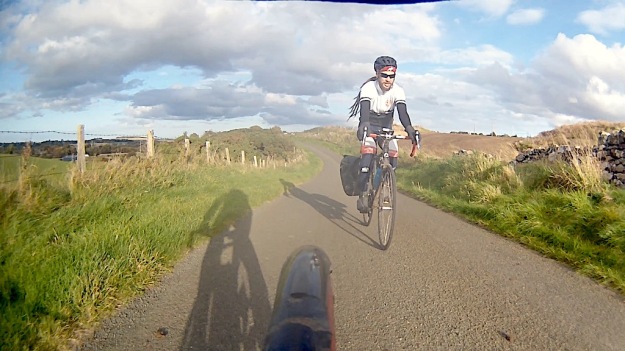 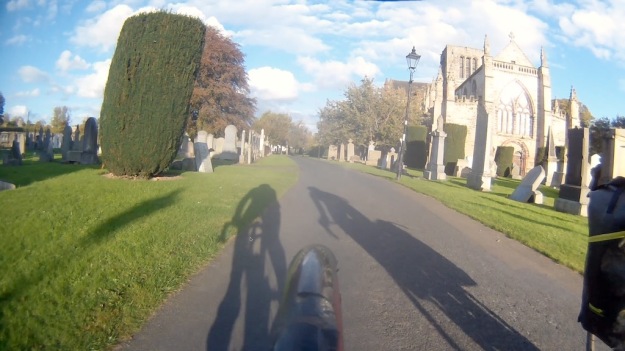 And finally – fare the well

What a great guy, a brilliant 70+ mile ride and an entertaining time.