It started with my nephew’s bike. It’s a touring bike with a good selection of gears, straight bars, slightly heavy and upright and also a bit too big.

We were all staying at his aunt’s in the wilds of Herefordshire. The house is up on a ridge in a countryside full of narrow  back lanes, muddy, damp and pot holed. But, a bike is a bike and I was grateful for the loan of it.

I discovered that starting near the top of a hill is a drawback as there’s always that climb up at the end of the day. Also, the area is fully of steep hills, often ramping up to well over 15%, often with a wee section of 20%+. So it is all quite challenging.

On one of my rides I discovered Mill Lane. Aghghghghghghgh – and I’ll tell you why later. 2/3rds of the way up I was struggling and staggered off and started walking, slowly, very slowly. But the challenge had been set. Next day, a short ride and I was back. This time, heart pounding, lungs gasping, legs aching I was up without a dismount. Yippee.

When I got home and uploaded my stats I discovered, much to my amazement, I had become King of that particular mountain.

So, 8 months later, I was back, relegated to a lowly 2nd place on my nemesis.

What every cyclist should wear?

This time I was with my trusty steed ready for “That Hill” This time we were cat and house sitting.

The cat being sat

By this time you might be thinking, “What is it with this guy and this hill?” or maybe not.

Well now, the hill starts right after you’ve passed what looks like an old mill house, then cycled down the stream to emerge at the slope ahead. You then know you’ve only got half a mile to the top. 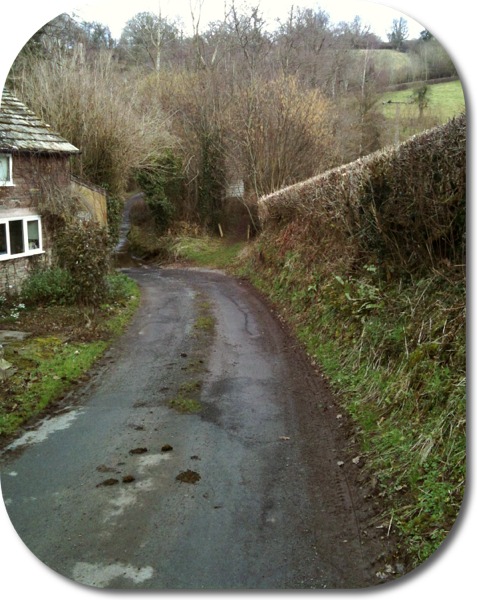 First you cycle down the stream!! The hill rises up to the top right.

Straight away it ramps up to over 20%, take it easy, take it slow, take it easy take it slow, then a wee rest at 15%. Oh no off again, another 22%+ ramp, then another ‘flat’ bit at only 10%. Onward and upward, wheel spin on the gravel as the next 20% section is underneath the bike, then a turn round the bend at a mere 17% before the final kick up at over 22% till it eases off with an almost downhill feeling 3% (OK well not quite, but it certainly feels easier).

So, take it slow at first, up out the saddle by the third ramp and gasping and spluttering as I reach the top of the fourth steepest ramp. Then ahead of me a car looking abandoned across the road with its passenger door wide open, almost blocking the path ahead. I manage to crawl past the driver’s door, gasping something to the woman putting up a notice beside me. I recover enough to get to the top. Done it!!!

Later, when I look at the result I see I’ve just exactly equaled the time on my last attempt. See that car!!

So, three days later, after being penned in by the weather, rested and recuperated, I’m ready. A quick 5 mile warm up and I’m at the bottom again, cycling down the stream. Scooting up the first bit – easy, then it bites back. I’ve gone too fast. By the fourth steep section I’m puggled. I’m sure I can taste blood in my mouth, I’ve just overdone it my breathing and heart rate seem to have gone ballistic, should I do this to myself? It’s the walk of shame again. I push the bike up that last steep section, hop on and try to cycle quickly up the last section. Ah well, not to worry, won’t be down this way for a while so maybe next time and it’s off for another 20 miles of ups and downs.

An amazing collection of old items

The ride is excellent, though clarty, passing buzzards, ducks, cows, tractors, the amazing house shown above and the army base where the SAS are rumoured to train. We watched a dismantled Boeing 747 swathed in white plastic on three huge trailers negotiating the narrow lanes on its way to the base the day before. Presumably to be used for training.

Got home and loaded up the stats much later. Wow! Even with walking it was my fastest time up that hill, well I never!

And who was the person with the KOM? It turned out to be a pro rider from Texas on a 100 mile jaunt, so a different league altogether.

I know, I know, ‘they’ recommend a cold bath, even with ice after a hard ride.

I know, I know a shower is the thing to get you clean and flush away the debris of a long ride.

But, I love to soak in a hot bath for a long time (topping it up occasionally), finishing a few chapters of my latest book.

But after a 90+ mile, very hilly ride I decided warm water relax would be just the thing.

It had been a hot ride (31 degrees for a while – and this is Scotland!), I’d been very, very slow. Dehydrated despite drinking litres of fluid, but legs felt OK.

So into the bath, ah bliss. Then a noticed the wee black dots around me in the water. The berry bug season has started. These tiny wee flies are not a good thing, they crawl into the tight areas of clothing and take a tiny bite out of you. The result – red, itchy spots for days after. Luckily when cycling they don’t seem to bite, just crawl, so maybe the induced wind keeps them at bay?

So ignore the things, with all that water they aren’t surviving anyway, make sure I rinse at the end and goodbye to my shared bathing experience.

In the middle of the ride I had got slightly off route. I came across this ford and started to ride across, slowly luckily. After a metre the bike started sliding all over the place. In a feat worthy of Danny MacAskill, I managed to regain my balance, unclip and get my feet on the ground. Then on foot I ploutered across the ford with the bike, still slipping & sliding all the way, but without falling into the river, just. So, it was soaking wet feet for the next 45 miles.

Finally, they’ve been spraying tar and gravel chips onto some of my favourite routes locally. One road was resurfaced about a year or two ago and was a pure delight, a ribbon of tarmac. It’s a wee quiet back road so now it’ll be a while before it will be properly rideable again.