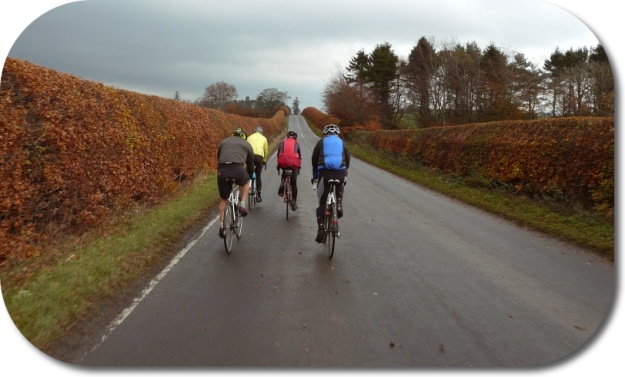 Well, here we go, my third in ‘the senses’ post.

I’m not referring to “what do you smell of” here, which is probably just as well, but what olfactory delights (or otherwise) greet you on your rides.
We’re lucky in so many ways here, we have the joyous changes of scene from being out in the lowland countryside, dominated by mixed farming, to up on the high ground with heather and grassland, grouse shooting and sheep rearing, then down to the coastal strip with it’s surf & pretty seaside towns, plus occasional visits to the metropolis of Edinburgh – a real visual feast once you’re done avoiding the traffic, pedestrians, tramlines, cobbles etc.

So what wonders for the nose does this all have?

Out in the morning, pottering down the high street in the village there’s the smell of partially burnt fuel from the cars which have just been fired up, the various seasonal smells of the flowers round the fountain and the winter smell of wood or coal smoke from the chimneys. On days when the wind blows from the north a pervasive stink from the intensive pig farm a couple of miles away. At other times there is a real treat – the smell of new mown grass from the park or folks’ gardens.

Then it’s away out and it changes. Depending on the time of year & activity in the fields you’re aware of all sorts of things. The cows in the field, the cloying sweetness of the oil seed rape plants, the diesel smells of the tractor chugging along in front of you, the occasional horse that you pass with its distinct odour, the hay stacked in the field, or piled up on a passing wagon and the good/bad smell of silage or manure recently spread, or spilled on the road. In the autumn there’s also the smells of the fields once the wheat or barley has been harvested.

Then maybe it’s a road to the west or north, the change of the tang in the air as you approach the sea, especially if the surf is pounding on the shore, the pungent seaweed rotting on the shore and in the seaside towns the fabulous smells of fresh brewed coffee, the sweet smells of the sweetie shops selling their rock & ice creams.

The there is a hard cycle up into the hills. But, some of the joys here can be amazing. As you ascend through the woods pine scents may fill the air or that earthy smell from the dense soil floor under the trees, a bit further on and that gorgeous (to me) coconut-type smell of the gorse with its bright yellow hairy flowers that combat the frosts in early spring. Then higher up, going through the hills, the heather, also known here as ling, exudes its fabulous scent, with its tiny purple flowers just filling the air. If you’re close enough and it is damp it can be overlaid by the presence of sheep hitting your nasal passages.

Then there’s occasional visits to the city, usually not a good experience for the nose, unless you’re on some of the former railway tracks, now converted into cycle tracks or cycling through the parks – a totally different experience from the fumes of the main roads and the stinks of the factories.

And of course there are the personal smells, but maybe that’s for another time?

So there’s all this and so much more – I’m sure you’ll all have your favourites.

6 thoughts on “What do you smell?”