There was cyclocross on down the road & my mountain bike was ready, I’d not been on it for months and had put a new chain & cassette on and so – time to go. But I was a wee bit late for the off road route so it was down the cycle path into the misty, murky day. Might as well have been off road for all the gravel & stones on it, ah well, a bit of a disgrace for a national cycleway. On the way I passed the local ploughing match. Multitudes of tractors going up & down a wee patch of ground, tearing it up. Not my scene, but I’m sure they must enjoy it all.

Ploughing on a bit of a dreich day

So after a brief halt it was off down the road for the John Muir Winter Carnival. Not sure if John Muir would have approved, but then again?

A wee video from youtube here (from the air):

http://www.youtube.com/watch?v=xLZMIkQw3Lc and a couple of others  on youtube as well.

But I was there for the cyclocross. The youngsters race went first and they were brilliant, scooting up the hills (some of them) and revelling in the mud and glaur – it was more than a wee bit damp! 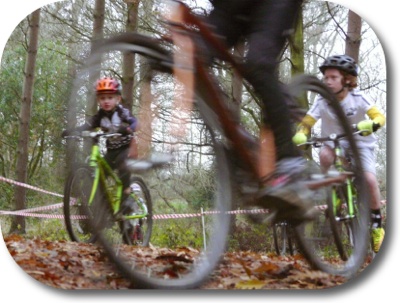 As I trotted round the woods on my old cheapo bike I realised the low chainring was slipping, so it looks like new chainrings are needed as well for steeper climbs. Then it was the turn of the seniors. I was off to Edinburgh to see a play later on (which was great!) so I only had time see the rowers and to watch the practise.

They normally race these boats on the sea

This was great to watch with the best riders zooming up the steep slopes like nobody’s business. Very gloomy though for action shots. 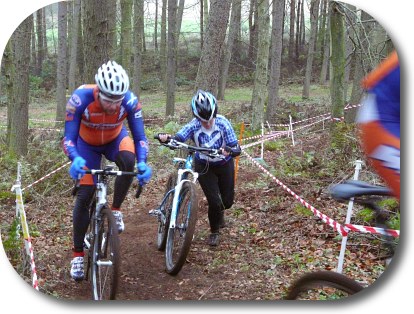 3 cycling buddies at the start line

St Andrew’s day dawned and the Saltire Festival awaited. The sun was out, hardly a breeze, stuff ready and time to go. Called in at a pal’s in Athelstaneford (the supposed birthplace of the Saltire – the Scottish Flag) and posed for a photo or ten. 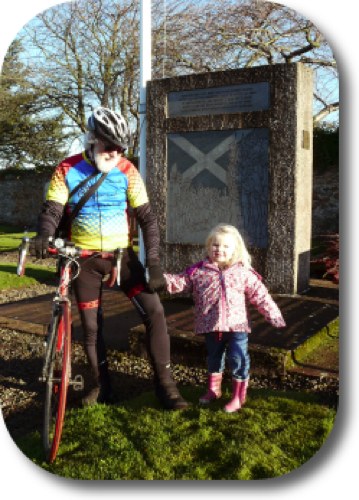 Athelstaneford – birthplace of the Saltire

The local pipe band was gearing up as I left. The flag’s journey was to start here & I would help it on its way 20 miles away later. So off I went to Prestonpans to await the rendezvous, with just road works, tractor, mud and  trains to hold me up. 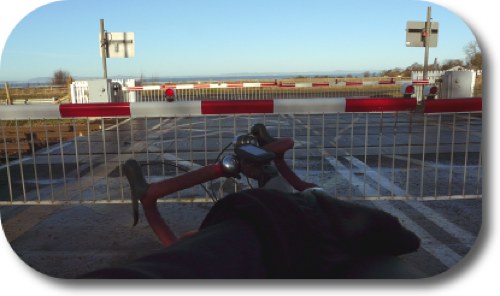 Waiting for the train to pass

Off to ‘The Pans’ to change into my kilt, meet the others, and pose for photies

‘The others’ were a mixed ability group on a tandem plus an adapted trailer on the back. We set off along the John Muir Way to Musselburgh, hauling the tandem along the sea wall to pass gates, through mud, gravel and all the stuff that makes it a bit iffy on a road bike. Then some more posing on the bridge over the River Esk to finally met the ‘Honest Lad & Lass’ on horseback plus another pipe band to hand over the Saltire. The folk on the tandem did brilliantly having cycled over from Haddington – all power to them. They were from a group called ‘Beyond Boundaries’.

The Handover of the Saltire to The Honest Lad & Lass

The Beyond Boundaries crew – brilliant lads

Along with the Pipe Band

Then it was ‘away hame’, with the sunset chasing up behind me, busy day & I had to be back. But time for a photo or two on the way.

Bike among the anti tank defences from World War II

Edinburgh from across the bay 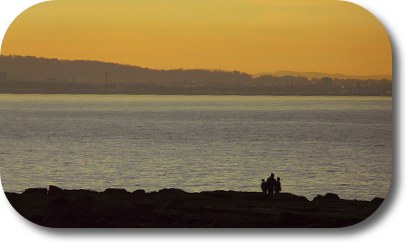 A last look back